A Visit to Dracula’s Fortress in Transylvania

Myth has it that high above the valley of Romania, in the principality of Transylvania, lies a castle that was once occupied by count Dracula himself. You will find this gothic fortress near the  medieval town of Brasov. Bran Castle has long been linked to this ancient vampire, though Dracula probably won’t be there when you arrive (but, pack some garlic just in case!). At least I seemed to have missed him.

Although more than hundred years have passed since Bram Stoker wrote his famous vampire novel Dracula set in the region of Transylvania, it continues to attract tourist attention. Known for its mountains, forests and castles, it’s not hard to understand why Transylvania was the perfect setting for the horror theme of Stoker’s book. While there are a few castles in the region, it is believe that Bran Castle matches the description of the Dracula castle in the novel. You can be the judge. Even if you keep the legend aside, the Dracula Castle along with some of the other places in Transylvania makes for an interesting visit.

As I traveled along the Transylvania terrain and saw the castle standing atop a rock a couple of hundred feet high, it looked quite mysterious. The snow-covered land and darkness of the gray sky certainly made it a more eerie sight! With a history dating back to the 13th and 14th centuries, this citadel was initially built by the Teutonic Knights. It was also a place of military importance. Much later, around 1920, the castle passed on to Queen Maria of Romania and became a royal residence.

A British royal by birth, Queen Maria married King Ferdinand I of Romania. Bran Castle or Dracula Castle, as it is commonly known, still belongs to the royal family who have restored it and now operates it as a museum. Along with panoramic views from the tower, there are over 50 rooms in the castle and most of them have furniture and other items that belonged to the Queen. 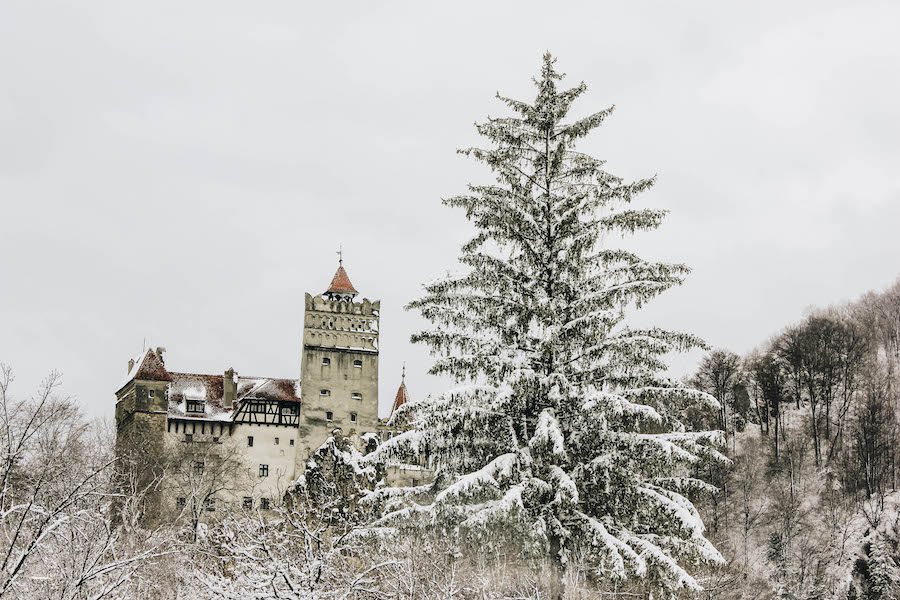 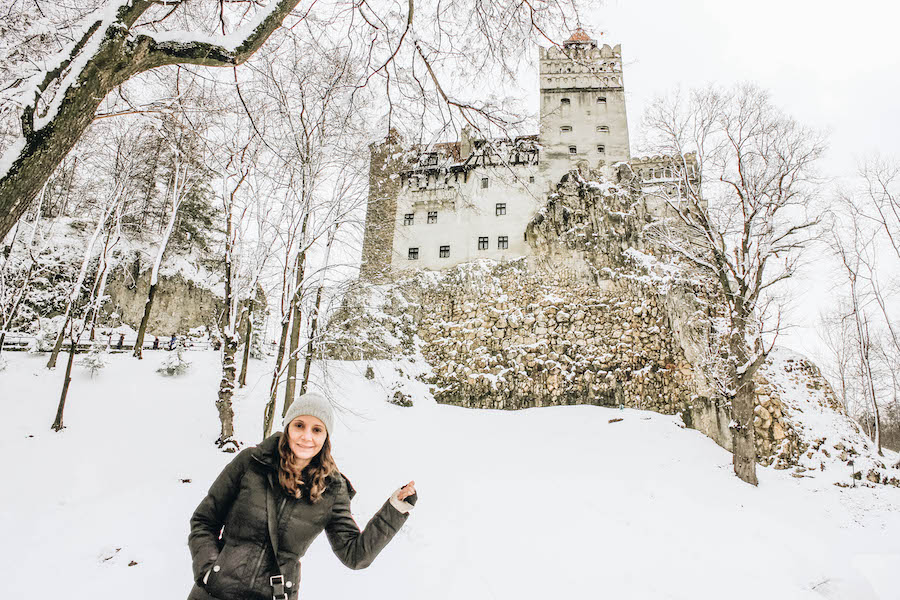 If you are wondering how Bran Castle came to be so closely associated with the Dracula legend, it all boils down to the power of words and the imagination. It is indeed hard to resist a good horror story about vampires! Though Stoker had never even been to Transylvania it is said that his writings (and the character count Dracula) were inspired by the very real and murderous Vlad the Impaler, who was known for the excessive cruelty to his enemies. Vlad was a real-life prince of Romania, and a feared ruler who was known to have impaled the bodies of his enemies on spikes leading to the name ‘Impaler’. There are stories that Vlad was once imprisoned in a dungeon in Bran Castle although there is no concrete evidence to prove this.

Transylvania has other sites related to the Dracula legend and Vlad, including his birthplace, but Stoker’s descriptions have made the Dracula Castle at Bran one of the most popular attractions that draws lovers of vampire lore from all over the world. 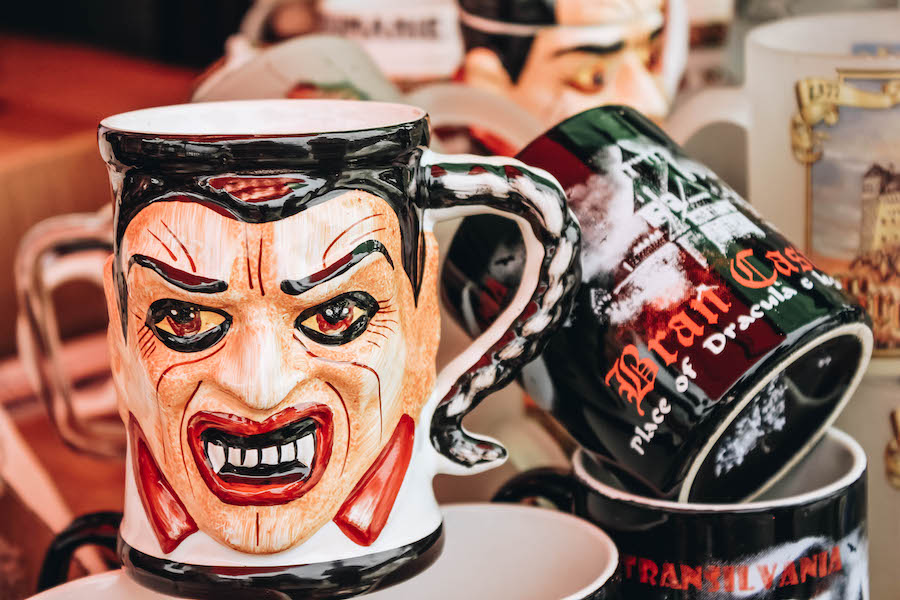 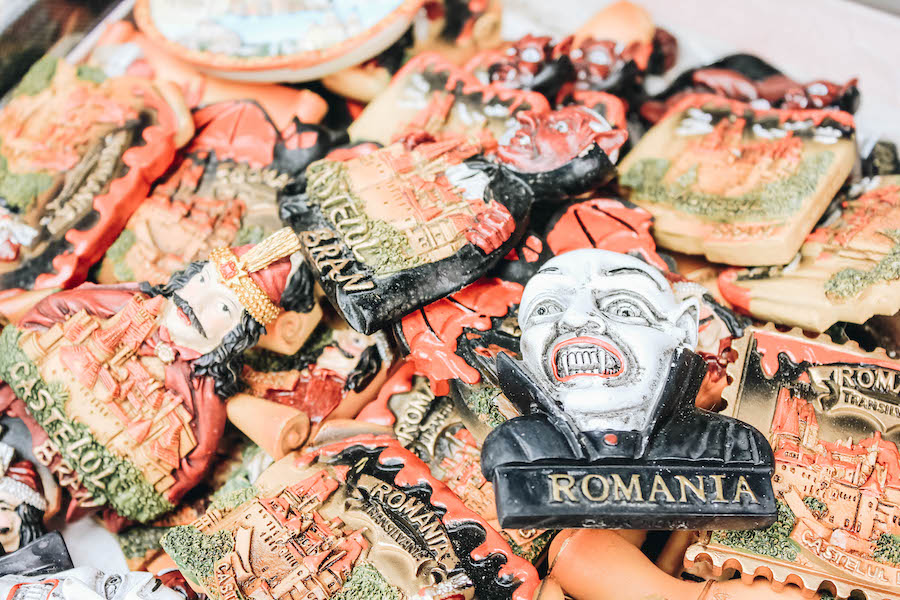 You can tour the Dracula castle on your own or go for a guided tour to get a better understanding. As I climbed the dozens of tunneled stairs and exploring the interior, it led me to realize that the sparsely decorated rooms pale in comparison to glamour of the nearby Peles castle. Though, there was a certain level of charm to the dark wood paneled rooms and stark white walls. Plus, interesting Dracula facts and vampire information is strategically placed throughout, along with relics from the royal family who previously resided there.

The castle is open every day around the year. You can visit it during the high season from April 1 to September 30. Timings are from 9 a.m. to 6 p.m. from Tuesday to Sunday while it opens a little later on Monday at 12 p.m. During the low season (October 1 to March 31), the castle is open from 9 a.m. to 4 p.m. from Tuesday to Sunday. Monday timings are from 12 p.m. to 4 p.m. Keep in mind that there are huge crowds during the high season especially in July and August and it may inconvenience elderly visitors. Waiting times to gain entry can be long in such cases. You can go in earlier in the day to avoid crowds or choose months during which tourist inflow is less. There are souvenir stalls in case you want to pick a memento or two. You can also visit the Tea House on the grounds of the castle.

You can book tickets for Bran Castle online or get them on the site. A basic ticket online costs 40 Lei for adults. There are discounts for senior citizens and students with valid ID. Admission is free for those under 7 years of age as well as for disabled persons. Audio guides are also available for a fee. If you are intending to visit around Halloween, there are special night tours for that time of the year. It is a good choice for those who like their share of spooky stuff and want to get a feel of the Dracula legend! Besides this, you can also get a separate access ticket for special exhibits such as the Torture Expo and for the Time Tunnel ticket.

Bran Castle is located in the village of Bran in the Transylvania region. It is around 30 km from Brasov and 190 km from the capital Bucharest. As you approach Bran, you can see the peaks of the Bucegi and the Piatra Craiului Mountains and forested areas. 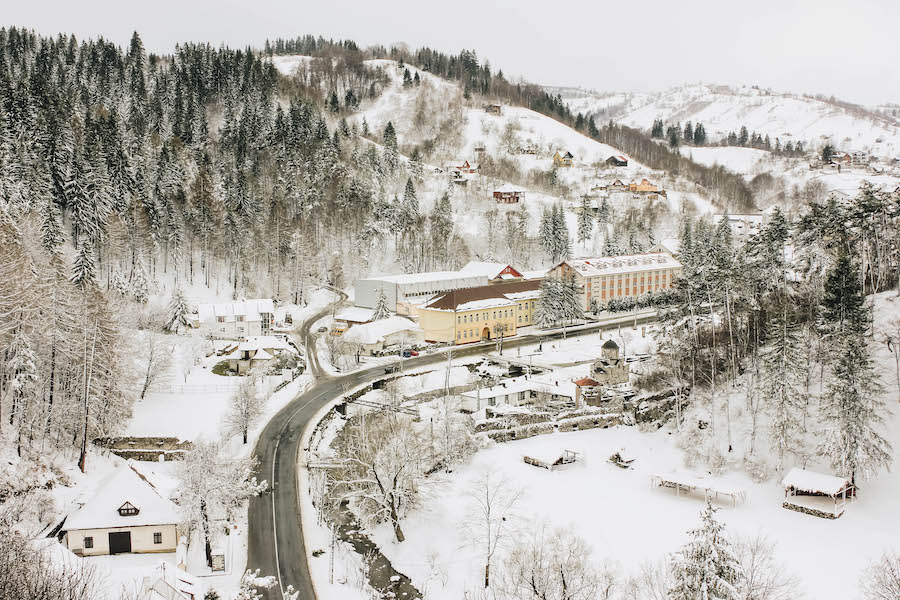 I will admit that there was a mystical atmosphere surrounding Bran, especially with the bitterly cold, snowy weather. From the exterior, it looked like the perfect setting for a vampire novel. Even sans Dracula, Bran Castle should be on your bucket list. 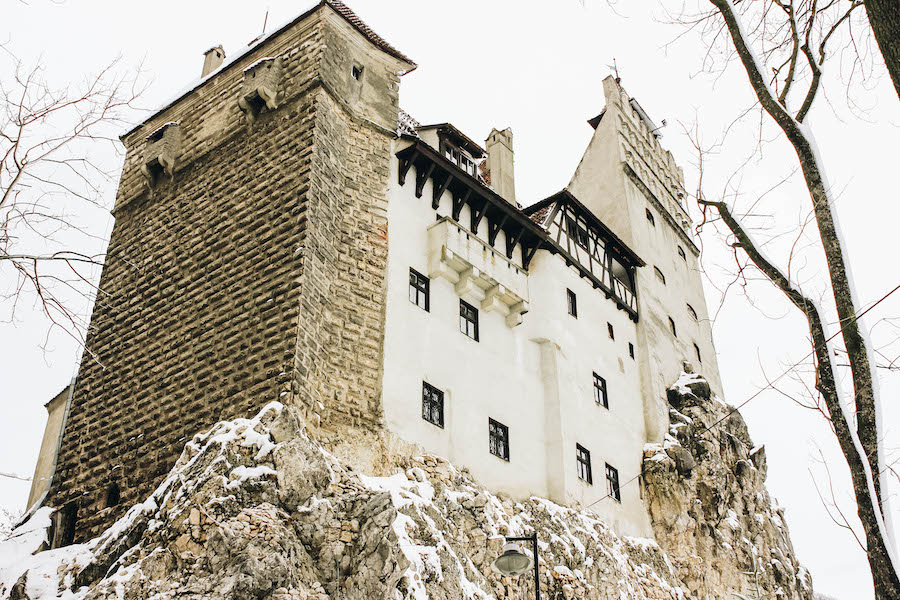 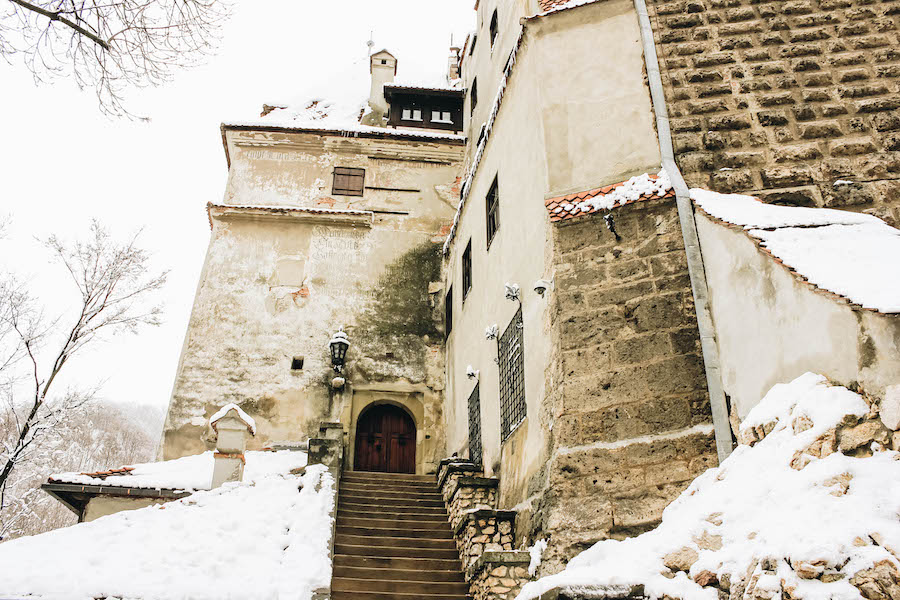 A Stop to Nearby Peles Castle

At the beginning of this trip, Peles Castle was merely a necessary pit stop on my way to Bran, a place to stretch my legs. That is until we walked up the path and there stood an incredibly beautiful castle surrounded by white snow. To say it was picture perfect would be an understatement.

Peles Castle’s construction began in 1873 and took 39 years to complete. With more than 160 ornate woodwork filled rooms, using 14 different kinds of wood, it’s easy to see why it took so long. Each room had its own glamorous style.

I paid an extra 32 lei ($7.99 usd) to get a photography pass, because I didn’t want to miss capturing the breathtaking interior and the opportunity to share it with you on this travel blog. We were shown through an array of elegant rooms; such as the Florentine Hall, Mirror Hall, Arabic and Smoking Room. Plus, we ogled the numerous pieces of artwork throughout the castle. Actually, all of the fireplaces were fake from the beginning because the King thought the smoke would hurt these pieces of art. The King was an avid art collector.

Though this castle continuously gets overshadowed by the nearby Dracula’s Castle, it is a beauty. Don’t go to Bran without making a stop here.

**There are quite few tours available that include both Bran and Peles Castles, like this one from Bucharest or a tour that includes both castles plus the Rasnov Citadel.

Where to Eat in Boracay Island, Philippines

How To Get a Barangay Clearance in the Philippines